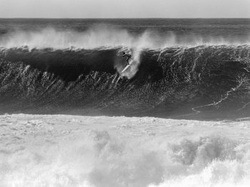 Greg Noll - Waimea
"Mavericks is a good example of a place where you have tow in and paddle in surfers coexisting. One of the unsaid rules is one that we implemented at places and that is you shouldn't be towing out at Mavericks unless you've paddled into a 20-foot wave." Peter Mel - Juice Magazine Issue 65


“For me, big wave surfing is the most physically and mentally challenging facet of surfing. Immersing myself in the ocean during its wildest states, with the ability to coexist and then harness that energy, brings about a level of excitement and gratification that is unrivaled. Given that no two waves are ever the same, that conditions are constantly changing, and life-threatening consequences are imminent if mistakes are made one is forced to leave all inhibitions behind." Greg Long

"Kelly Slater, move to free surfing. Everyone is waiting. Everyone wants to see you free surf. Contest are fucking Boring. You are a sick cunt." Jamie O`Brien no Twitter

"Going out there and catching a really big wave is scary, but it's nothing compared to fighting a life-threatening illness or disease. Charge for Charity is my quest to paddle out and catch a 50-foot wave without the use of a jet ski, just with my bare hands. In that way, I'll be conquering my own fears. I'm going to use that to raise some money for Breast Cancer Australia."  Jeff Rowley on Surfline


"Professional surfing is a condemned structure loading its cracked foundation on a bed of loose sand facing an incoming tide. Surfing itself is what it has always been: an extremely boring adjective, but an extremely exciting verb." Blasphemy Rottmouth


"Surfing wasn't so much about talent then; a lot of rail and a lot of guts were all you needed. Curren didn't train. There was no running underwater with boulders -- instead, there was a lot of kicking back with cigarettes and beer. He dove for his food, and that was enough. When it came down to it, he could paddle with anyone." Jason Borte, about Pat Curren on Surfline